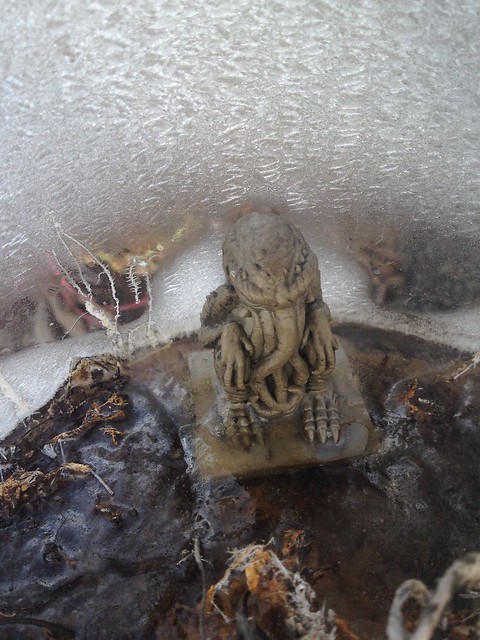 I took a moment to consider and decided that there was no phrase ever uttered in any language so frightening. Glancing down from our hiding spot, I saw a mist cloaked mountain ledge, a shimmering lake of silvered magic lapping at its edge, and a dozen heavily armed guards milling around the stone statue of a monstrous dragon. Given our track record, it was more than likely the statue would come to life and attack us the moment we showed ourselves. Our odds of this mission succeeding were slim, the likelihood of one of us being injured or worse were astronomically high, and it was almost guaranteed to be difficult, painful, and near impossible.

Fi declaring she had a plan was definitely, absolutely, positively more frightening.

"It's not that bad," she hissed, rolling her eyes. "Not all my plans are dangerous."

I gave her the skeptical look that statement deserved. "Your last great plan got me killed."

"But I fixed it!" she protested. "And you weren't killed; you were only mostly dead, not, you know, DEAD dead."

Uh-huh. HUGE difference there. Mammoth, really. Why hadn't I seen it before? "That's very reassuring. What's your plan?"

"We destroy the statue, disable the guards, slip into the cave, get the icon, go home. Not necessarily in that order. Except the statue part. That definitely happens first."

Sighing, I rubbed at my eyes with both hands and let out an exasperated breath. "Do you have any more detail to the plan than that?"

She winced. "Well, I'm trying to figure out how to destroy the statue without, um, what's the word? Triggering it? Activating? Animating? Whatever."

"What happens if you can't? If it does whatever?"

"Well, it's demonic, decidedly neither feline nor avian, and those scales look like pretty tough armour, so I'd really rather not find out. Of course, I doubt destroying it will be as easy as hitting it with a hammer in just the right spot."

Fi snorted and gave me an exasperated look. "Are you kidding? Half of those options would have yanked me home the moment they'd assessed the situation, a quarter would have ratted me out to the half before we'd ever left home, and the last quarter would have already attacked and made with 'oops' face. This will be easy. No worries."

"Until you said that," I told her. "Now we're jinxed. Thanks for that."

"You are way too superstitious. Especially for a werewolf. Look, just climb down and take a bite out of that guard with the blue sash, okay?"

"Looks like a screamer - I want the distraction. Meanwhile, I'll take care of the statue."

Glaring, she tossed her hair over one shoulder and took another look at the scene below. "I...I'm still thinking it through. I'll figure out. Once you've got Blue screaming, the guards will start after you. Shifting once you're out of sight should throw them off; then double back, slip into the cave, and snatch the idol. It, ah, should look like a squashed, compact geometric Foo dog with one paw on a big round opal."

"Uh-huh. Remind me again why we're doing this?"

Right. Of course. And the Earth rotated the sun because Jupiter lost a bet. I just stared at her.

My stare became a glare.

Clearing her throat uneasily she added, "To be on the safe side, Keely is going after ruby, Khardeen and Fang are fetching sapphire, and London and Sparrow are retrieving topaz. Which they will bring as far from each other as possible until I can pop up to destroy them. Easy as pie."

Sure, if pie required a genius mastermind to bake and came from a recipe that made a pharmaceutical chemist's work seem simple by comparison. No big.

Remember what I said about our track record? Just as I was moving to ease down the ridge to the ledge below, Fi's hand clamped around my upper arm, drawing me back beside her. She pointed to the statue, its eyes flaring with a sudden amber light, the guards giving up a shout as they noticed.

Fi sighed. "So I guess the guardians are linked. That's...inconvenient."

"Forget everything; just get me the idol. I'll take care of...of this."

I laughed, a tad hysterically, as the lizard's multiple tongues began to wiggle, its claws to twitch, and gave her yet another skeptical look. "Well, gee, that sounds like a great plan. Very detailed. Love it."

Fi shrugged. "Think of it as a plan with room for improvisation." Grinning, she reached out and ruffled my hair. "This could be fun if you let it," she said. "Think of it as an adventure - do you have any idea how many mortals would kill to do this sort thing? Movies, books, theme parks - they obsess over it. You should count yourself honoured you get to experience it first hand."

Smiling, she stood, her back to the ledge, and quickly kissed my cheek. "Don't look so worried, honey; I have a plan, remember?"

And then she took a step backwards, slipping over the lip of the edge.