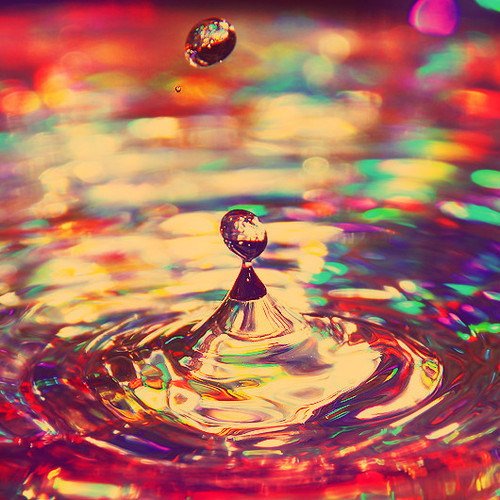 Title: Begun in the Waters

Once upon a time, a very, very long time ago, back when the Earth was young and life younger yet, the Fae began. We came from the soil, from the rocks, from the trees, from the plants, from the beasts. We evolved, and we didn't, from life itself. We had strength, we had speed, we had grace, but we were...unfinished, like shells, like shadows, incomplete.

Something was missing, something important and vital, and we realized this. We were meant to be the guardians of this world, to tend and protect its resources and speak for those who could not speak for themselves. But man were many, so very, very many, and we were so few and so fragile, so easily destroyed by man and his weapons. We needed a shield. We needed protection. We needed to be more.

The first of the Royal Fae were brother and sister, husband and wife. It is said they found a well in the groves beyond the edge of the darkest forest. The water, if it was indeed water, was a wash of brilliant colours, sparkling like liquid gems as the pair drew it from the well's depths and into the sun. Magic, power, energy, all of it was contained within those droplets that passed the pair's lips and slid down their throats. More than an infusion, this liquid formed a connection, linking these two, these sole two, to all the power and energy the world had to offer. A channel was opened, beginning in the earth and flowing through them and back again, becoming exponentially stronger with each cycle.

When the pair returned to the Fae, they set about bringing their brethren into the connection. Strength, power, agility, speed, everything they were became more and with this energy came magic, came immortality, came so much more. The pair were rewarded with a throne and the Fae, now so much stronger than man, withdrew to pockets of world beyond and between where they could safely and freely be left to grow and prosper.

This, then, is how the Fae came to be. It is the origin, the beginning, the start of species, of a kingdom, of a power so great and magnificent today, brought about by but a few drops of colourful water found in a well in times before time.

And it is only the beginning...