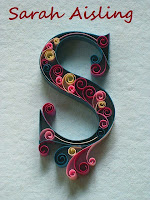 Sarah Aisling hails from the East Coast of the US and loves living by the ocean with her incredibly indulgent husband and precocious daughter. Her main writing interests lie in Romance and Romantic Suspense, and she is also planning a Dystopian novel. Unwilling to box herself in, her future story ideas also include Sci-Fi and Paranormal fiction. She constantly fights for space in her head with numerous plot bunnies and fictional people who just won’t be quiet; they even invade her dreams.

While growing up, Sarah could often be found with a marbled composition book across her knees, scribbling away with her favorite colored pens—never anything as mundane as blue or black. She’s forever grateful to a grammar school teacher who gave permission for Sarah to check books out of the library that were far above her grade level, sparking her creativity to reach new heights.

For many years, Sarah concentrated on other areas of her life and let writing fall to the wayside. She never lost her love for the written word and could always be found with a book (or two) in hand, along with the “emergency book” she’s always kept in her car. Now she carries her Nook everywhere she goes.

In 2006, Sarah’s car was hit by a truck that ran a red light. Her injuries were extensive, the recovery long and difficult. A severe head injury left her unable to think, concentrate, or read as well as before. The challenges of a cognitive deficit that affected the area of the brain responsible for word access angered Sarah, leaving her determined it would not get the best of her. Since she was able to describe the words she wanted even though she couldn't remember them, the Thesaurus became a constant companion and source of comfort.

Sarah began writing fan fiction in 2009, determined to push through the cognitive difficulties and recapture her wild imagination. Encouraged by the response to her stories, she broke into writing her own original fiction. Sarah entered the TWCS Publishing House original fiction contest. She won second place Voter’s Choice, first place Judges' Choice, and was offered a publishing contract for her romantic suspense entry.

Sarah is currently editing her novella turned novel, The Weight of Roses. She continues writing fan fiction in addition to original fiction, rising an hour early each workday to make time for writing. A sequel to The Weight of Roses, tentatively titled The Path of Thorns, is in the works.

When Sarah isn’t being enslaved by her characters, she can be found with her nose in a book, biking, hiking, camping, seeking out unique nail polish colors, obsessing over anything leopard, or spending time with friends and family.