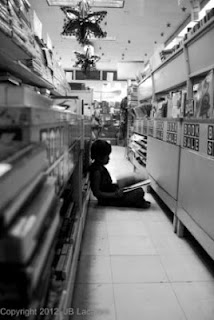 The sidewalks downtown held an eclectic smörgåsbord of merchandise showcased in front of each shop. There were tables laden with books, jewelry, engraving and embroidery items, toys, art supplies, or food samples. Racks held all kinds of clothing from the latest fashions to bargain basement clearance items.

Ciel and Joanie hovered at the table in front of the art supply store. Joanie ran a finger over a set of chalks and sketchpad that were on sale; she was quite the budding artist.

“I don't know . . .” Joanie's forehead wrinkled as she unconsciously pushed her glasses up. She was extremely frugal for a teenager, and it was rare she shelled out money for luxuries.

Ciel leaned in and whispered, “If you don't buy them, I won't tell you about Jason.”

Joanie nudged her shoulder into Ciel's then snapped up the art supplies.

They moved on to the bookstore. Both girls were avid readers, and they spent a great deal of time exploring the sale table. They made their selections, planning to swap piles once they finished reading them.

The two friends entered their favorite café and collapsed at a table in the back corner, placing their heavy shopping bags against the wall. They decided to split an order of fries and a large Coke.

Ciel rested her elbows on the red-and-white checkered tablecloth, plucked a sizzling hot fry off the pile, and took a bite. Joanie salted her half liberally before doing the same, eyeing Ciel over the top of the humongous soft drink.

“Okay, okay! Jason walked me home yesterday, and we hung out at my house.”

Joanie's eyes narrowed, and she leaned in closer even though there was nobody else in the café to overhear. “You do realize Jason missed football practice to 'hang out' with you, right?” She employed air quotes for emphasis.

“Right? My mom just doesn't get it. So he was holding it out of my reach, and I lost my balance trying to get it back.” Ciel hesitated, swallowing hard.

Joanie gasped, “Did you fall?”

“N-Not exactly. Jason caught me and then hekissedme.” Her face burned a deeper shade of crimson.

The sight of Joanie's wide brown eyes behind her big glasses, jaw agape, caused Ciel to burst into a fit of giggles.

“Are you shitting me, Ci? 'Cause I don't see why you'd be laughing.”

Ciel tried to catch her breath. “I'm laughing at you! You should see yourself!” A moment later, her laughter dried up and her pale gold eyebrows drew down. “Wait—why are you so surprised a boy would kiss me?”

Joanie gazed at Ciel as if she were daft. “Not just any boy. Do you know how many girls have late night fantasies about him?”

“You talkin' from experience?”

“And then told me he's had a crush on me since last year.”

“That's heavy. Are you two an item now?”

“He wants us to be . . .” Ciel's words drifted off, and she looked down at her hands, spinning the ring on her finger around and around.

“You don't?” Joanie slipped back into her usual unflappable persona; Ciel was certain she'd make a great therapist someday if she didn't pursue art.

“So? It just has to be the right kiss.” Joanie nodded her head with certainty. “Was it awesome? Did it melt your insides?”

“Gawd, yes!” Ciel grabbed Joanie's hand and squeezed so hard Joanie winced. “I had no idea a kiss would feel like that. I, um . . . felt it in places other than my lips.”

“You're supposed to feel it everywhere.”

“Yeah? When he held my hand after, I felt all light and tingly like I might float away. I had a hard time concentrating on my homework, too. Do you think . . . ?”

“I didn't pay attention in any of my classes today.”

“He wants me to wear his letterman's jacket.”

“That he'll realize I'm a nobody.”

“You're freakin' awesome, Ci! I hope he realizes I'll break his kneecaps if he hurts you.” Joanie cracked her knuckles, making Ciel laugh.

The girls were so deep in conversation about events with Jason that Joanie never thought to ask how they'd gotten together in the first place. Ciel felt guilty hiding things from her best friend, but she knew once Joanie got wind of a mystery, she'd never stop digging until she uncovered the whole story.

A few hours later, Ciel lounged on her bed daydreaming while poring through the books she'd picked out at the bookstore. When her cell buzzed, she answered it absently without looking at the display.

“Who's Joe?” Jason's voice came through the earpiece, and Ciel nearly dropped the phone.

“You were expecting some other guy?”

“No! No other guys call me.” Ciel wanted to jam the words back in. “Jo is Joanie.”

“Well, good.” A short silence stretched between them before Jason spoke again. “Anything new about Janice?”

“Oh! Joanie and I went to the sidewalk sale downtown. It was fun. Joanie got some art stuff—she's really good at painting and drawing—and we both bought a bunch of books.”

“Cool. Did you tell her about us?”

“'Course. I was hoping you would. Did you think about wearing my jacket?”

“Yeah.” Ciel's face heated up, and she wondered if Jason was rethinking getting involved with her.

“You kiss really good. I couldn't tell it was your first—except maybe when you turned your face away. So, what do you say?”

“It doesn't bother you that I haven't had other boyfriends? I'm not a cheerleader or popular or any of that.”

Jason sighed. “I'm interested in you, Ciel, not how many other guys you've been with or whether you shake pom-poms.”

“What will your friends think?”

“Who cares? Anyway, the important ones already know about you.”

“Okay.” Saying that one word felt like jumping off a cliff.

“I come along with it, you know,” Jason teased.

“Go to the spring dance with me?”

“I'd love to. Can I wear the jacket?” Ciel held back a laugh.

“I'm starting to think you just want me for my jacket.”

“A dress would be great—a really short one.” Jason snickered.

They talked for another hour, falling into a comfortable rhythm. Ciel called Joanie as soon as they hung up to squeal over the dance and fret about what to wear. She dug through the snarl of papers in her backpack and found the flyer for the spring dance. It was the following Friday night, which gave her a little over a week to find a dress.

Ciel was about to put the flyer away when something caught her eye—among the list of chaperones was Paul Jeffries.