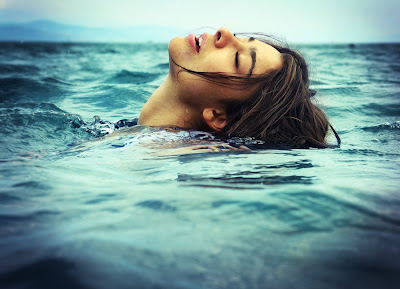 She tipped her head back, mouth open, breaths too shallow for comfort.

“Please, babe.” The tapping approached slapping. “You’re scaring the bat shit out of me here.”

Beneath her eyelids, her eyes darted back and forth like a dreamer’s.

I contemplated slapping her for half a second, even had my hand half cocked. Then she opened her eyes.

“Shit!” I slammed back against my door, sharp pain exploding along my side as I hit the arm rest at full speed.

Inky black swallowed the normal amber brown color of her eyes as I stared. The darkness expanded until no color or white remained.

“Start the car,” she said in a voice not entirely hers.

“Where are we going?”

“Start the car, Adam.” A growling edge underscored her voice.

“Yeah, um…” I fumbled the keys into the ignition. “Who am I talking to here?”

“Adam, go.” This time only Riley spoke, but she sounded like she hurt. “Hurry. Need to… find her.”

“Where?” I cranked the engine and pulled out of the lake park. “I need a direction.”

She muttered softly, nothing I could make out. Then, “Southwest. Clermont.”

I didn’t talk along the way. Riley gave me precise directions in the scary voice and I followed them, hoping like hell her psychic guide could be trusted. We eventually turned onto an isolated property. Remote enough to stash Kait, though the drive showed recent use. From a resident? From Kait’s kidnapper?

The cement well rose up about four feet from the ground. A wire mesh grating padlocked in place over the opening kept foreign debris and curious children out of the water. From here, it the well looked easily wide enough to accommodate an adult, not one of those tiny jobs that would require hours, maybe days, to free someone from.

I parked the car and popped the trunk.

Riley sucked in a huge breath, arms flailing out, grasping. I caught one hand before she cracked me in the face.

She panted for breath, her head tipped back. Like a swimmer out of breath and breaking the surface of the water just in time.

“You’re back?” I touched her cheek, urged her to look at me. Warm brown eyes focused on me. “Thank God,” I murmured.

I hauled her close, kissing her hard and fast.

“No more out of body demonic possession things, okay?”

Riley looked—exhausted. We’d been going since the wee hours of the morning and the sun had crested and started its descent. We had several hours until sunset still, but Riley looked like she hadn’t slept in days.

“I can’t promise anything until we get Kait out,” she said. “When we connect, she’s very strong. It’s like a hostile takeover.”

“Let’s check this well out, then.” I released my seatbelt and opened the door. “If she’s here, we’ll get EMS out here and have her out in no time.”

“We can’t risk the news breaking.”

“Riley.” I pulled free of her hold but stayed put. “Kait has theoretically been stuck in this well for two or three days. She’s going to be dehydrated, hungry—”

“Carson is keeping her alive,” she said.

Okay. That set my thought process back.

“He’s not trying to kill her. He’s trying to get the drive. Kait is his insurance policy.”

I backtracked to our conversation with Hannah at the lake. “Meaning Hannah needs to deliver the drive or else?”

“What the hell is on this drive?” I rubbed my temples with my thumbs. “Carson is risking his entire career here.”

“Ohhh, fuck,” I groaned. I wanted to be surprised, but really… power and public attention turned people into idiots who thought they could get away with anything. And Roger Carson had spent nearly three decades getting his brain melted by that warm glow. “What is it with these dickwads who can’t keep it zipped?”

“How did Kait find out?”

My gaze snapped from Riley to the well.

“Dying sick?” I asked. “The sort that maybe some compatible DNA could fix?”

“And Dad’s didn’t match. Not even a little bit.” Riley unbuckled her seatbelt. “She overheard the doctor talking to her mom.”

“We have to get her out now.” I pushed myself out of the car and damn near ran for the trunk. Every minute seemed more precious. If Carson stopped by to check on her before we had any proof, I’d never get the powerful bastard nailed for this. The anxiety Hannah had expressed at the lake made a lot more sense now.

Fuck that mother fucking fucker. Hey, listen, I just found out you’re my Dad and I’m dying. Mind donating a little DNA to maybe save my life? Nah, he’d stow her in a well and get whatever proof of paternity existed instead.

I’d kill him myself before he could hurt Kait more.

Flashlight, bolt cutters, first aid kit, and fifty feet of rope. The well had a sturdy looking crank, but I’d bring my rope as backup. I hoped like hell the well didn’t go deeper than forty feet. We were in high country for Florida though. We could be well and truly fucked if Kait sat at the bottom of a hundred foot well and the crank couldn’t support her weight.

Riley stumbled after me, struggling to match my pace. I cut the locks holding the screen in place.

With her help, we got the well open. I picked up the flashlight and shone it down the shaft.

No answer and the beam didn’t penetrate far enough for me to see her. Which meant the well went deeper than fifty feet. Mouth going drier than a Florida December.

I looked up to see Riley using my bolt cutters to cut the well bucket away. She pulled, unwinding several feet of rope.

Riley grabbed me by the shirt front, yanking me nose to nose.

“Lower me down and let’s be quick about it,” she said. “There’s no way to hide we’ve been here and we both know we have no case without Kait and the drive. The word of a psychic and a teenager ain’t gonna cut it, Murray.”

She cut me off with her lips and my brain shorted out again.

“We can keep her safe. But we have to get her out of there. Let’s get her back to the surface,” she said against my mouth, “and nail Carson to the wall.”

Cursing myself, I nodded.