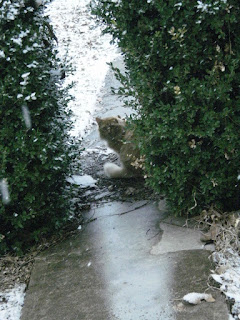 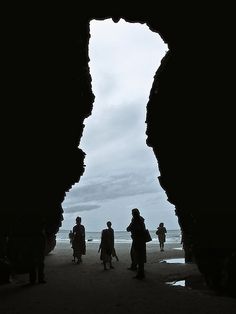 I was drunk. Or dreaming. Or my drink was spiked. Or all of the above, because I was certain that cat just talked to me. And cats, in my experience, were fairly quiet characters.

“I said follow me. We’ll have time for your disbelief later. Just chop chop, ok?”

I blinked twice, but the furry feline was still standing on the snow covered path way. Dreaming. Had to be. I had that safe feeling you get in good dreams. Things were weird, but I was safe.

The cat turned tail and walked through the bushes and down the path. Shrugging my shoulders, I decided to see where the dream would lead.

“You have a name or should I just call you Mittens?”

The cat looked back over his shoulder with look of disdain only a feline could muster. “Name’s Alastair,” he replied. “You can can the jokes. I’m not interested and you don’t have time for it. We have to meet the rest of the group by fourteen hundred and we’re already fifteen minutes behind schedule because you were late. So shake a leg, ok?”

Fourteen hundred? The cat talked like he was part of the military. Which was crazy. Almost as crazy as him being able to, you know, talk.

I looked around as we made a quick march through the forest. Winter was quickly turning into Spring. Which was a little odd. It was January, so Spring was a couple of months off. But the patches of snow were thinning and small, colorful flowers were beginning to peek their heads out of the soft ground. I thought I knew the name of those little flowers, but it was escaping me in that moment.

“We’re on the outskirts of Bayedge, in the forests of Lochwind.”

“I’ve never heard of those places,” I stammered, stopping in my tracks. “I was just in Philadelphia. I walked through an alleyway and that’s when I saw you.”

“Please keep moving,” the cat said, his impatience bleeding through in his tone. “Yes. You were there and now you are here. We have to keep moving.”

“How am I supposed to know that? I was told to wait for a person. You arrived and now I’m leading you to the others.”

“What others? Where? And why?”

“I don’t have your answers, Lydia,” the cat responded. “I’m just your guide. Now please follow me.”

The cat knew my name. And it was talking about places I’d never heard of before. Put aside, for the moment that it was talking, none of the other stuff made any sense either. Made up place names, a cat-guide who just happened to know my name, talking animals? Someone must have slipped something in my drink; this dream was too trippy to be of my own making.

We walked through Spring and landed in Summer just as we exited the forest and hit the sand. At the edge of the forest, where the sand licked the edges of the mossy undergrowth, I knelt down and picked up a doll that lay discarded on the ground. It’s dirty pink dressed stirred a memory in the back of my mind, but I couldn’t place it. Alistair’s voice pulled me out of my own thoughts.

“Welcome to Bayedge,” the cat said plesantly enough. “Your party is just ahead.”

Further down the beach, I could see a cluster of rocks that looked like some sort of cave. I could see sunlight streaming through it and assumed that it must lead to another area of the beach.

“Can’t you tell me anything? Something to expect?”

“Not in my job description,” the cat replied, sitting and flicking it’s tail around its body in a fluid motion. “I got you where you were supposed to be. The rest is up to you.”

The safe, dream feeling had worn off completely. I pinched myself, hard, and closed my eyes. When I opened my eyes, I was disappointed to see that the cat was still sitting in front of me. He appeared to be judging me harshly.

Nothing felt right anymore. The cave felt ominous, despite the light shining through. And all of the weirdness of the place seemed to settle on me at once. Talking cats, seasons as swaths of the forest… None of it made any sense.

I took a hesitant step toward the cave, but dread filled my stomach. I wanted the dream to end. i wanted to be back in the coldness of the city that was familiar to me, wrapped in the bitterness of the temperature and the smell of the city I knew so well. I looked back at Alastair, but the cat had vanished. I saw the edge of the beach and the deep, green mouth of the forest that we’d walked through, but no cat in sight. I clutched the doll close to me because the memory it stirred seemed solid and safe.

I couldn’t go back into the forest. I had no concept of where we’d been. I had to go forward and just hope that I’d wake up.

Still, I walked toward it. I thought then that maybe going through those standing rocks might be my ticket back to a reality I could make sense of. Maybe I could get off of this topsy turvy ride I was on and wake up back in a world that made sense to me, one where cats didn’t talk.

The cave was narrow and I could easily see the opening which let in the brilliant light. Four shadowy figures milled within the confines of the small cave. I squinted, trying to make out who or what they might be. I had no preconceptions; after Alistair the talking cat, these figures might be anyone or anything.

“Lydia,” a familiar voice called. It bounced eerily off the rocky walls and reached my ears with a strange resonance. But I still recognized the voice from somewhere. “Lydia,” it called again. “Come inside.”

I hesitated, cocking my head to the side as I tried to place the voice.

I took another step and the four figures turned as one to face me. They were dressed in strange ceremonial garb. I reached out toward the figures and saw, with little surprise, that I was wearing a similar cloth. I stepped into the cave and the light nearly blinded me. The figures were nothing more than shadow against the brilliant light pouring into the opening.

It was then that recognition swept over me. I was hot and cold at the same time as I realized who waited for me.

The four figures each held a hand out toward me. The fear was gone, but it was replaced with a disbelief so strong I thought for sure I’d close my eyes and wake up in my own bed. These people couldn’t be here. Not in a dream, not in any version of reality that made any sense. My mother, grandmother, aunt, and childhood best friend stood in front of me. They were dead…. They couldn’t be in the cave in front of me now.

“Mom?” I whispered, my voice caught in my throat. “Is that you?”

“We’re here,” she replied. I couldn’t see her face, but I knew she was smiling. Before, I could always hear it in voice. “Come closer and join us.”

“But, how is this happening?”

I stepped closer to them, the light threatening to engulf even their shadows.

“Don’t you remember yet?” another voice asked. That one belonged to my beloved grandmother who died when I was only three years old.

I started to say, no, I didn’t remember anything, but just as the words were on the tip of my tongue, everything came flooding back into my mind.

I was out with friends. I’d had a couple drinks, but felt ok to walk home. I walked with my one friend to her apartment, hugged her and continued walking down the street. I turned onto a side street and then ducked into an alley for a short cut. As I exited the alley, I remember there was a bright light and then ….

“Then I was here,” I whispered.

“Finally,” my mother said. “Alistair must have taken the long road to bring you here. We came as soon as we heard and expected you much sooner than you arrived.”

“There,” Mom said. “There, you’re dead. But here, you’re just beginning. Have you started to remember any of this yet?”

I looked around at the cave. Either my eyes had adjusted or it had eased up a bit, because I could see better. Off in the corner of the cave I saw a little castle made in the sand. It had been hung with seaweed and decorated with broken shells.

Suddenly, parts of the forest flashed back in my memories. Places we’d visited at different times, different seasons. The seasons didn’t change with where we walked; they changed with my memories. I’d been walking through the forest of my memories. I looked down at the doll in my hand. Of course! My favorite doll from when I was a little girl. Jenny, I’d called her.

Even Alaistair the cat had a place in my memory. Far, far off, I remember him sitting outside of the shop where I used to meet my grandmother for breakfast on Sundays.

“There’s nothing to be scared of,” my grandmother said softly. “You see that now?”

I nodded and stepped forward. My mother and grandmother each took one of my hands and together, we walked toward the bright light at the entrance of the cave.

“Time for forever to begin,” Mom said as we reached the archway.

I stepped forward without any hesitation into the light.