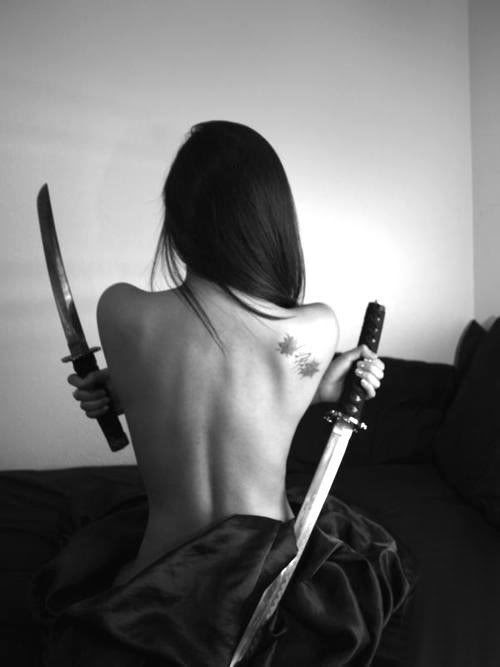 I jolted awake, sitting up straight in bed. Dark silk sheets puddled around my waist and the cool touch of conditioned air sent goose bumps chasing along my bare skin. I had the wakizashi and katana of my daishō in my hands and poised to strike. Their sheaths clattered to the floor beside the bed, but the noise barely registered. My heart pounded like a railgun, hard, fast, and relentless.

What had woken me?

I controlled my breathing and closed my eyes against the gray light of predawn, straining to hear anything out of the ordinary in my hotel room.

I didn’t hear anything at first, but pulled on a tank top and jeans.

Not a gunshot, and not in my room, but a door being opened in a less than polite fashion somewhere down the hall.

My bare feet slapped the wooden floor as I ran into the hall, blades at my sides. Heads prairie-dogged out of doors, cautiously checking out the disturbance. I followed my ears to my left down the hallway, smiling grimly as people ducked back inside. At least someone would call the cops.

Two voices, male and female, shouted ferociously at each other, unaware of the attention.

“Brilliant,” I said. “A domestic disturbance.”

I prepared to be told to mind my business, but found the situation escalated far beyond a shouting match. Three rooms down from mine, a door hung drunkenly from busted hinges. Inside the room, a man in worn jeans and a polo shirt held a young woman pinned to the wall by her throat.

“You think you can get away from me so easily, little bitch?”

“And you think you get to decide when we’re done?” He lifted the girl off her feet. He easily topped her by a foot, all of it bulging muscle. “We’re done when I say so.”

He easily topped her by a foot, all of it bulging muscle.

She clawed at his hands, gurgled and kicked, her legs scrabbling for purchase beneath a cotton nightgown, but she couldn’t dislodge the mountainous bastard.

Well, I certainly couldn’t do worse.

His fist smashed into my cheek, knocking me away. I hadn’t even seen it coming. I tumbled to the bed, stars distorting my vision. Holy shit, the bastard moved fast. I regained my feet, wary eyes on my opponent. He ignored me, but I wouldn’t take his inattention for lack of awareness again.

Whatever else he’d meant to say ended when I punched him in the side of the throat. He doubled over, gasping and releasing the girl. She quickly scurried out of range.

Mr. Universe shot murderous death rays out of his eyes. At least, he wished he did. If my military training had anything to say about it, he didn’t stand a chance against me otherwise.

I dredged up my company manners and smiled.

“I believe you’ve overstayed your welcome.”

He spat at me.

“Charming.” I looked at the girl. “Mind if I rearrange his face a bit?”

She gaped at me then shook her head.

A meaty hand clamped down on my right shoulder. I slammed the hilt of my wakizashi straight into his nose. Cartilage crunched. Blood sprayed. Mr. Universe howled. He swung at me, his fists like mini sledgehammers. I ducked and led him into the sturdiest surfaces I could find. He dented the walls, the doors, shattered an artfully framed print hanging by the bed.

Sweat darkened his brown hair. “She’s my girl. She’s not going on any trip to another planet.”

I shot a look of surprise at the tiny woman. “You’re in testing for the Gaea Project?”

A snuffle of blood and snot interrupted us. Mr. Universe swiped a hand over the remains of his nose. He didn’t even flinch. I noted his dilated pupils.

“Are you high?” I demanded.

“I’m gonna kill you and fuck your damn corpse.”

“That sounds like fun.” I smiled at Mr. Universe. “Could you be more specific?”

“There are two bitches here and I want to make sure we get the details right for the police.” I gestured between me and the girl. “Which one of us are you intent on murdering?”

“Kindly remember that when the police get here,” I said.

She smiled for the first time.

“Convince him that we’re done, and I’ll remember anything you want,” she said.

I swung my blades in tight arcs.

Mr. Universe and I circled each other, sizing up our competition. I had to respect the tiny woman for standing up to this guy. As much as I wanted to kill the asshole for punching me, I wanted to kill him twice over for picking on someone he so brutally overpowered.

“Listen, buddy,” I said, “you still have time to walk out of here with all your body parts intact. Even the one that makes you think it’s okay to beat up women half your size.”

Let him figure out which part I meant.

“I don’t listen to bitches,” he said.

“That much is painfully obvious.”

I moved first, needing to draw him out, see what he could do. He had some skill, which pissed me off even more that he’d threatened someone less able to defend herself. He put up a decent fight. For all the muscles seeming to obscure any higher intellectual functions, he seemed to grasp right off that I didn’t want to kill him.

His left fist pounded into my right bicep. My wakizashi clattered to the floor, falling from my numb right hand. I barely held onto my longer blade. His right connected with my ribs, almost certainly breaking something.

“Okay,” I said through my teeth. “No more playing.”

I tucked my blade up along the back of my arm, pivoted to the ball of my left foot and struck out with a high roundhouse kick, nailing him in the temple. He staggered a step or two, right into a baseball bat. The girl swung for a homer and toppled Mr. Universe to the ground.

The room became abruptly quiet, the silence only disturbed by my pained breathing.

“I kept this around for him,” she said.

I poked him with my foot. “Maybe.”

She lifted an eyebrow. “Not the most scientific determination.”

“I’m not a doctor.” I shrugged. “But if he moves, just go all Babe Ruth on his ass again.”

“Drop the weapons,” a hard voice called. “Both of you. Hands up where I can see them.”

The bat thumped to the floor, but I complied more slowly than he would have liked and found myself slammed against a wall.

“She saved my life and she’s hurt.”

“You held your own when it counted, kiddo,” I said, the words mashed against floral wallpaper.

The hands holding me eased up and I let out a shuddering breath. Softer hands guided me to a chair and sat me down.

I listened to her explain the situation to the officer, including stressing that Mr. Universe—mundanely named Jorge Gomez—had threatened to kill me and then tried to make good on said threat. I drifted a bit, pain making it difficult to focus.

Fingers snapped in front of my face.

I swore the officer laughed under his breath.

“We’ll take it from here, Officer.”

I lifted my head to see Extraterrestrial Aeronautics and Space Administration officials mobbing the hallway. Dr. Paulina Cho, the physician overseeing the medical testing of all the Gaea Project applicants, made a beeline for me, muttering as she assessed the damage.

“Commander,” she finally sighed. “You’re on the short list to lead this mission, you know that, right?”

“So what are you doing here?”

“Pissing off EASA’s investors. Filling in for Mr. Universe’s usual punching bag.” Relief made the world seem to melt at the edges as Lina gave me a shot of something wonderful for the pain. “You think I should have let him kill her?”

“Because if that’s the kind of commander you’re looking for, I’m definitely not the woman for the job.”

“I think I would be disqualified as well,” the young woman said.

“He would have killed me tonight if not for Commander Bryant, Lina,” she said. “I’d follow a commander like her to the ends of the universe.”

Lina blinked. “I—I’ll certainly include that in my report, Frannie.”

I looked up in surprise at the open devotion in her—Frannie’s—voice. She held out a hand and I accepted her handshake. Firm. Warm.

“Francesca Tomei,” she said. “I work in supply chain management. I’m on the short list to maintain inventory and move lots of boxes around.”

“Do you move boxes the way you swing a bat?”

She laughed but got pulled away before she could answer. EASA took over and tried to finish me off with reports and statements.

“Lina, do we have to fill out all these forms in space?” I asked.

“Then I really hope I get the job.”

Author’s Note: As the title says, this is a prelude to my Gaea’s Chosen series, featuring characters from the crew of Gaea’s Ark long before we meet them in Gaea’s Chosen: The Mayday Directive.

Cara Michaels is the author of the Gaea’s Chosen sci-fi romance series and host of the #MenageMonday flash fiction challenge. #DailyPicspiration
Posted by M L Gammella at 10:00:00 AM