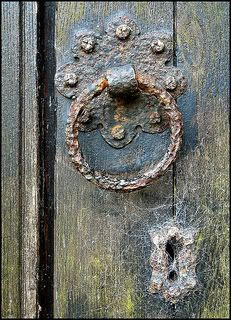 “Momma says we don’t go in there anymore.” Rebecca twirled her pigtail around her pudgy finger and popped her gum. “She said it was a bad place.”

“That’s definitely not what Momma said.”

“Look,” Grace said, pointing at the door. “It looks so old and full of secrets. Let’s just take a look, okay?”

“She didn’t say anything about looking.” Rebecca didn’t look as sure of herself. She looked more curious than anything.

The girls inched closer to the door. Grace placed her palm against the center of the wood panel, but yanked it back with a hiss.

She gave her sister a toothy grin and shook her head. “You’re so easy. I was playing with you.”

Rebecca punched Grace in the shoulder and called her a rude name. “I swallowed my gum I was so scared!”

Grace chuckled again. She pointed at the keyhole and both girls grew silent. They pushed each other back and forth as they tried to decide who would look first. Rebecca, being the largest, won out and she placed her small, round face against the old door and peered within.

Her back grew stiff and straight as she stared silently. Grace tapped at her shoulder, trying to get her sister out of the way, but it had no effect on Rebecca. She continued to peer through the hole, wordlessly.

Rebecca’s shoulders began to quiver and her hands slapped violently against the wood on either side of her face.

Her voice gave way as the shudders moved down her sister’s back, undulating through her body. Still, her face remained plastered at the keyhole.

With a shrill cry, Rebecca stood up. She turned slowly toward her sister and Grace shrank backwards in fear. Rebecca looked the same, but there was something vacant in her eyes. Something was missing. Instead of looking into Grace’s eyes, Rebecca looked out into the distance, her brown eyes wide and dilated.

Rebecca’s eyes flicked over to Grace’s face and something flashed within their depths. Grace shrank back another two steps.

“Nothing, Grace,” she replied in a voice not her own. “Nothing at all.”

“There’s no such thing as a bad place, right, Grace?”

“Only people,” she whispered.