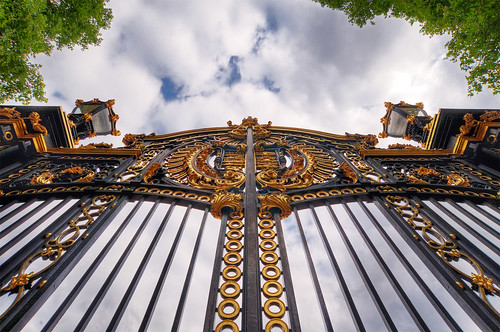 “Elisabeth, let me in!” Andy screamed into the intercom at the gates.

“I will not!” came the muted reply.

“They’ll be here any moment. You have to!”

There was silence from the intercom. Andy kept pressing the button, hoping the noise of the buzzing would drive her to give in. She didn’t. The unlocking mechanism on the gates was not activated.

Andy looked up at the top of the gates. They were so high, but could he scale them? Then he remembered the electrified wire that ran round the top, hidden in amongst the wrought iron filigree. He was sure she wouldn’t have switched that off.

He glanced behind him at the water, and saw the mist gathering. It wouldn’t be long now.

He screamed, “Elisabeth!” at the top of his lungs and kicked the gates. He could kill her! But the thought did nothing to temper his growing disquiet.

The sound had reached him now: a strange squelching mutter that flowed with the ripples of the water, growing in his ears like the buzzing whine of a transistor radio that hasn’t been tuned in properly. And as it took over his brain and his thinking, sweat broke out on his palms and his temples. He started pacing back and forth in front of the gates, willing them to open, sure she must be watching, sure she wouldn’t do this to him.

The sun was dropping down below the horizon now and an eerie pink glow had taken over the lake, darkening the mist, making the shadows within it dance as they moved closer.

Another sound reached his ears, a sort of moaning groan. It took him a few seconds to realise he was emitting it. It was no good, he would have to relent.

He fell down in front of the intercom and pressed the button, whispering his pleas in rapid succession, hoping he couldn’t be heard, knowing he was risking his life.

He thought he heard a mechanism in the generator behind the gate start up and his hope rose while he continued whispering, his eyes closed, lips almost touching the metal of the speaker. Then something cold swept across his back and blinded his freshly opened eyes.

He tried to kick out and scream, but neither action was successful as he was dragged backwards and the gravel of the driveway ripped open his back.

He felt the water envelope him as something wrapped round his limbs and pulled him under. His eyes no longer blind, stared into the dark depths, trying to see what had him and any possible chance of escape as his lungs began to scream for air. He caught a glimpse of a light in the deep expose a smiling face, and as his mind dimmed, he wondered how Elisabeth could be down here too, when she was safe in the house? And why would was she smiling like that?