We have a special guest on the blog today, Nicole Wolverton, who graciously agreed to fill in today's spot. Starting January 3rd, we will have a new permanent author in the Thursday spot, alternating with Michela Walters. Find out more about Nicole Wolverton below her prompt, including information about her must have debut novel.

Delilah Barbour stared at the wallpaper. Perhaps the roses were meant to be soothing, but her retinas flamed. In the corner lurked a face, a broad pink nose topped by a narrowed eye, lids swollen. The other eye was gone, plucked out and dark as a forest. The mouth—that terrible mouth—lips puffy, beaten.

It was always time for lunch.

Into the room Mother sprinted, bearing a metal tray. Delilah avoided looking her square in the face for fear of what lay there, what loathing she might find. Still, the ends of the hair tickled the blue housedress just below beefy shoulders. The smell of talc underlaid with sweat crusted the air. The crimson slip peeked out, like the Red Queen.

The clink of the tray on wood pressed Delilah’s bones into petrified trees, knees aching as though she’d run for miles.

The door. Opened. Closed. Footsteps on stairs. Delilah bolted from her chair to inspect lunch. The white plate with blue flowers under three slices of dry white toast. A coddled egg in a pink ceramic cup just the color of the wallpaper maw. Scallion rings floating in chicken broth, great globs of fat gleaming on the surface. The bowl with the chipped rim, Alice—sweet Alice—drowning in the bottom.

Off with her head.

Clear glass of something orange. She sniffed at the glass, nose hung over the edge. Just juice, sweet and sour. She pocketed the fork.

Delilah gobbled eggs and toast, eggs and toast, all the while noticing the arrows in the paper pointing toward the door. There was no use in refusing the suggestion. Even the flowers shouted approval in the squeakiest, hungriest of voices.

The door knob chilled the hand, but it turned nice enough. Quiet enough.

One after the other, her feet ate up the carpet. So loud, the pattern—down the cranberry twirl to the plum border, blueberry ribbon down the stairs. Delilah followed the shine-burnished banister to the sitting room and stopped at the wide window, fringed in gold brocade and burgundy velvet. Thin white fingers played the fabric: sticky sticky.

Into the hallway she crept only to spy Mother at the kitchen counter pounding bread with full-grown fists. On the sideboard Delilah counted cups. White teacup with pink roses, just like the wallpaper in her room. Celery-green, crack in the rim. Creamy gray, missing the handle. Shiny sharp on the plank with the bread. She pocketed the knife.

“Mother.” Voice low and gruff, like the grumble of a dog. No matter.

“Naughty Delilah. What are you doing out of bed?” Mother was smiling with her face, but Delilah could see the Red Queen beneath the skin.

“Nothing, Mother. I’ve come for more toast. May I have more toast?”

“You go back to bed, and I shall bring you another slice.”

Delilah nodded, just once. Hard enough to shake loose the curls from her barrette.

The rose wallpaper was here, too, mouths screaming with those big, beaten lips. Delilah clasped the knife to her chest.

Mother backed out of the kitchen only moments later. The crimson slip hung beneath the blue housedress.

Off with her head. 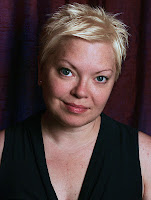 Nicole Wolverton is a freelance writer from the Philadelphia area. Her short fiction has appeared in Black Heart Magazine, The Molotov Cocktail, and Penduline, among others. Her debut novel, a psychological thrilled titled The Trajectory of Dreams, is due out in March 2013 from Bitingduck Press. She also moderates 5 Minute Fiction, a weekly flash fiction challenge. For more information, visit her website at www.nicolewolverton.com.